It was so good to have a mental health day away from studies over the weekend! It needed to happen as Uni has been pretty full on and now with booking my flight to arrive in Melbourne on the 29th December, its all starting to get real!

I went out for an SF stairs walk with my friends – we were doing the walk up to Telegraph Hill. First, we had to have something to eat so we found this incredible Mexican joint, Don Pistos on Union Street. There I discovered spiked horchata – that is spiked with rum! I took one sip and tipped the whole thing all over the table, lucky my friend got out in time!! The guys cleaned it up quick sticks and bought me another, thank goodness it was not as strong as the first, I am such a lightweight drinker lately. Oh, and the fish tacos were just incredible with a bit of spice on the fish and the slaw was so fresh atop fresh corn tortillas – divine!

After lunch, we headed up the hill to Coit tower and travelled up many stairs to the top checking out the many vistas as we went along. The view of the bay was stunning. We walked right to the top of the hill and then we went back down feeling a bit of vertigo on the way. 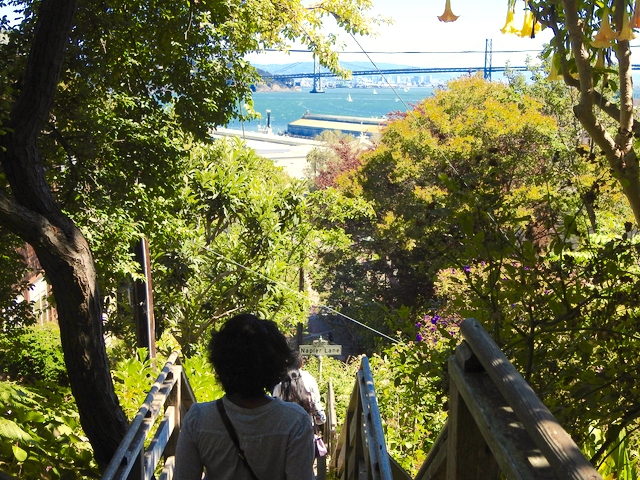 There is the Bay Bridge that connects the city to Oakland and here are the stairs, which proved to be a great workout – thank goodness I was not too wasted! 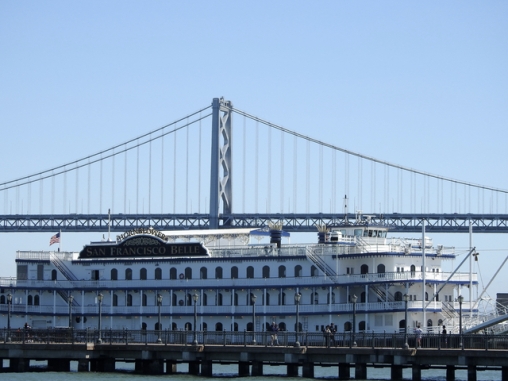 After our stair adventure, we wandered down the Embarcadero for a little while checking out the scene, the weather was absolutely perfect! 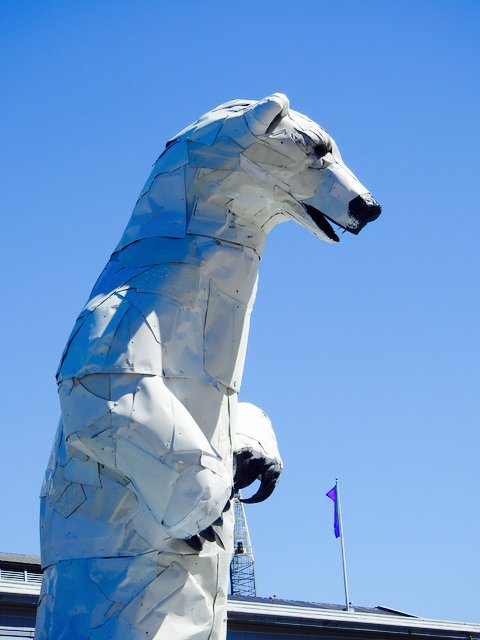 This incredible art piece of a polar bear was in San Francisco after being built at Burning Man. It was installed as part of the climate summit held in the city over the week – this is such a statement to global warming – a thin polar bear suffering at the loss of its Arctic habitat.

Oh and here’s a little immigration story… my son was asking about why my family immigrated to Australia for a school project.

My mum and her family moved over in 1962 and travelled to Melbourne by ship called the Oriana and it took about 2 weeks to get to Station Pier in Port Melbourne. They moved to the coldest place in Victoria – Newborough where my nan moved from her teaching job to work as a librarian. It was funny that they moved there from tropical Sri Lanka. The reason they left Sri Lanka was that there was a coup d’etat in Columbo and there was no scope and no future for their family there. They left with their suitcases, a few furniture pieces to white Australia. The only reason they were accepted into Australia was that their credentials were important – meaning they had to prove they were of European background. As it turns out my Nan side was Dutch and my Pops side was French. The white Australia policy ended in 1973, such a fascinating racist past in what is now multicultural Australia.

My mum and dad met at a cricket match in Melbourne and they married in 1965 when they went up to Queensland for a holiday that was where they wanted to be with the tropical weather.

My dads family moved over in 1949 and lived and went to school in St Kilda as his Dad has retired from the railway so they migrated to Australia. They too had to write out their genealogy to prove they had a European background and my dad’s side is German. His family moved to the country when he grew up when he met my mum when she was 21. Dads family also migrated for a better life in Australia and he travelled on the ship Orontes, this is history we need to retain for our future. Thanks, Mum and Dad and Cheryl for sharing this story with me over the weekend!