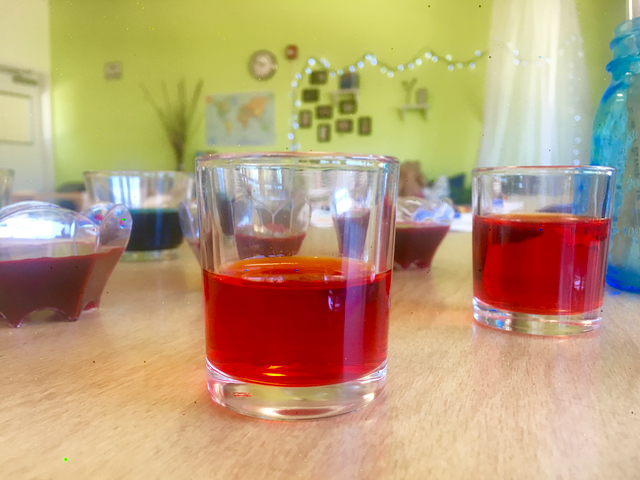 A week of seeing such beauty unfold with the children’s art projects that they made for Back to School night last Thursday. The previous week we planned projects for the parents to work on for their kiddos, another writing project.  But we had to get some interesting writing and art up on the wall by the children to show their parents 😀 They may look like shot glasses, but the glasses are filled with liquid watercolor ready for a watercolor wash over the top of a crayon drawing. 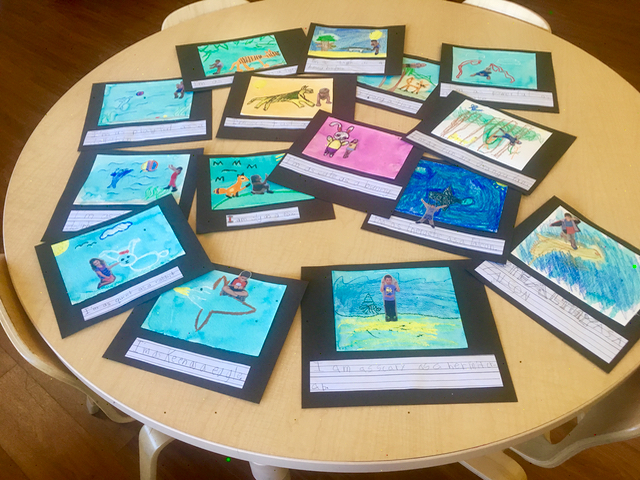 The project was inspired by the book Quick as a Cricket where we read the book to the kids, and we brainstormed some adjectives and animals for their own “power animal pose.” The plan was to write their animal such as, Cute as a Bunny or Playful as a Dolphin on their lined paper and then draw their animal with crayon on the watercolor paper and cover the background with a watercolor wash which is so vibrant. While they were making I was calling the kids outside to pose so we could place them on their picture – it was such a great idea from my co-teacher to take their photo to add to the final artwork.

We had a lot of fun during Story Workshop finding inspiring ideas for stories where the kids will create little scenes with blocks, animals, natures, found objects and make a dry collage to find ideas to write. Some children even paint, and eventually, the watercolor will be made into a background for a story or however they want to use it. 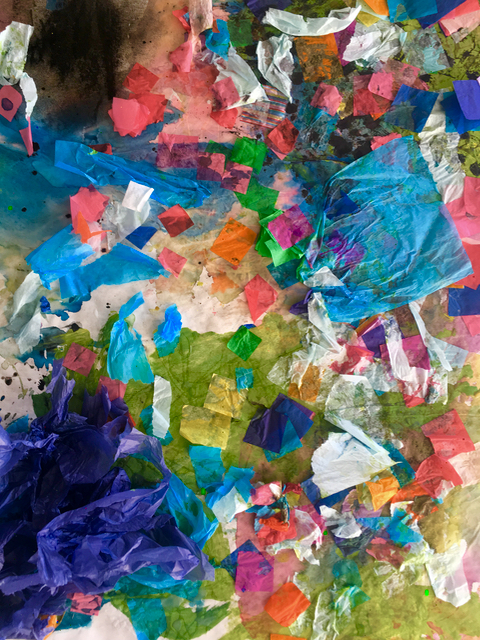 The Arts Specialist at our school creates some incredibly simple though powerful pieces this using tissue paper glued on rolled out paper by the meter to make a huge mural of color with the Provocation what do you know about art? It looks so good hanging around the school with so much color.

This is Alex a massive ball of finger knitting that lives in the 4th-grade bunk bed! To imagine the size of this yarn ball, it is sitting on a single sized bed!

Our math this week was looking at Jo Boellers YouCubed Maths resources which were fun and interactive for the kiddos, and they really enjoyed the Growth Mindset videos.

Other math fun is so much fun with a manipulative that is so accessible – a deck of cards! Here are a couple of games we played last week.

Salute – One deck of cards and at least 3 players. One player is the General who makes the combinations. The other two players each take a card and, without looking, flip it up on their forehead (it took me a couple of tries to get that!). The General adds the numbers together and says the sum. The other players have to quickly figure out the equation that made the sum. The first to say the correct equation takes both cards (i.e., 10 +8 = 18, my card is 10). You can play with addition, subtraction, multiplication, etc.

Spiral – With one full deck of cards you create a spiral on the table starting from the middle and working outward (cards facing up). Jack = 11, Queen = 12, King = 13, Ace = 1. Each player has a pawn on the middle card of the spiral. Taking turns rolling a dice and moving forward that many spaces. To stay on that spot you land on, you need to say the number sentence of the card and number you rolled (i.e., 5 +11 = 16). If you say it incorrectly, you go back to your previous spot. Bonus rules: doubles = if you roll the same number you land on, you get another turn/bump = if you land on the same spot as another player, you bump them back to start.

The end of the week we had Back to School night, so we were busy prepping a story project for the parents. The children wrote the beginning and drew a picture then the parents would write the middle of the story and draw a picture and this week coming up the kids will see what their parents have written to complete the end. The kids were so excited to see what their parents had written, but we had to keep it until all the parents had completed their writing so the kids can see them all together in a group. Unfortunately, we had two families who did not come to Back to School night, but life happens!

Thursday was also the night when the heat arrived, and it stayed with us until Sunday. The temperature on Friday was 42 degrees Celsius, and it was exhausting in the classroom with no air conditioning – there are just two fans in the class, and there was no breeze either so it was super draining and uncomfortable! Still, we just did low key activities like writing and planning stories and finished the week off with a popsicle to cool off.

The long weekend was an excellent time to relax but not for me! I had to start my Sustainability Report for a fictionized school in 2020 full of references and written in APA style. I had a 7:30 am yoga class Saturday as it was too hot to sleep. After yoga, I came home and got to work for the rest of the day, and lucky my neighbor dropped over a fan to cool down as the house was closed up tight to keep the cool in but the upstairs was as hot as ever! So I got my report off in an excellent direction, and I still need to write another 2,500 words, but I now have a plan which is such a good thing.

Sunday I went for an early bike ride and caught the sun behind the clouds and the haze. Riding really helps with getting my mind clear and think about how I am going to deal with the report and everything else coming my way this week. Lucky with the advice of my co-teacher I have bought a planner so I can keep track of my work, volunteer gigs, school, and family. It really helps to see and plan my week ahead as well as have it on my calendar on my phone – so much to plan for the next 6 months, but it is all good and all exciting!